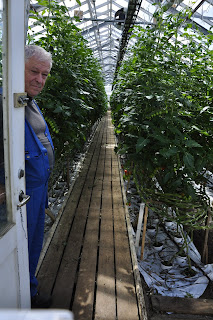 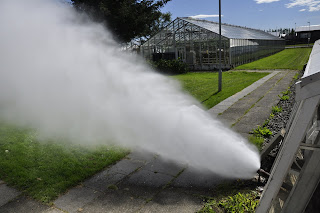 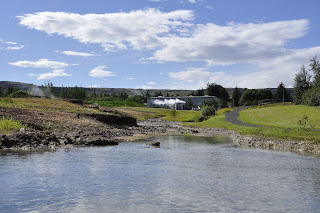 I let myself sleep in today, well, until about 9 AM. I was exhausted after the several kilometer hike yesterday to the point where the night-less evening did not phase me. I took it easy in the morning until I had a bus to go to Hveragerdi around noon. In the mean time, I booked a rental car for tomorrow an 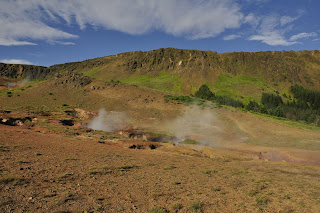 d made some appointments. T 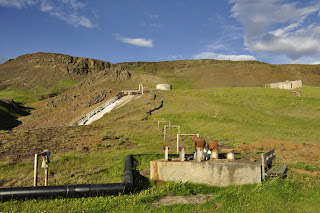 he drilling company got back to me! Yes! I get to go up close to the rig tomorrow morning- so psyched! They won't actually be drilling tomorrow, the project manager told me that they will be measuring, but even that will be interesting to see them do. I also got in touch with another one of Thorgils' friends, Hannibal, from Fludir. Originally I didn't think I was going to get in touch with him because I didn't think I'd be able to make it over there (its about 40 km from Selfoss). However, since I have a car and I found out today that Fludir is where they have MASSIVE greenhouses to grow vegetables for the whole country, it will absolutely be worth the trip.

Greenhouses- Hveragerdi has been nicknamed the 'Town of Greenhouses' because they are sprinkled throughout. Originally, my research had led me to believe that this is the place where there is the highest concentration of them. I quickly learned today that it actually is not, Fludir is. Today I went out on a whim and decided to explore the town on my own since I could not find any farmers' contact information.

The bus stop is right in front of a tourist attraction of the town, a greenhouse/souvenir shop called Eden. I walked in and talked to a gentleman at the storefront. I told him what I was up to and he gave me lots of information, like the Fludir one. He then pointed me in the direction of the owner, Yohan. I got started talking to him and he was delighted to show me around. They recently opened this expansive place and are still renovating. Part of it is a shop, another a restaurant, and the rest the greenhouse where he is setting up to grow his own herbs, fruits and vegetables. Apparently Iceland is the largest producer of bananas in Europe because they can manipulate the climate through geothermal energy. As a result of this, there are bugs that exists in Hveragerdi that don't exist anywhere else in the country because of this manipulation. It might be interesting to find out what the repercussions are for this circumstance. He showed me how geothermal is the essential ingredient for this operation to exist. From where it enters the system as steam, how it is converted to water, and then dispersed across the greenhouse. Wrapping pipes hug the walls and the temperature is controlled by a slight turn of a lever. He uses two different systems. One for the greenhouse, the other for the restaurant. The difference is in the circulation and the number of pipes. It was pretty interesting to see.

After, I proceeded to walk around the town, photographing every possible greenhouse that came into site. I decided to wander into a corridor between a grouping of them and came across some farmers. I started talking to them and told them what I was doing and they brought me to the owner, Jorgen Gurdonsson (not sure, trying to spell it from the recording). He is a farmer with a few greenhouses growing flowers, cucumbers, and tomatoes for 2 nursing homes- one in Hveragerdi and another in Reykjavik. He showed me the operations, how the system works and is controlled and was willing to give me details about the specifics. I learned a lot- not just about how geothermal energy is utilized to grow food, but also about the food itself. The temperature in the greenhouse needs to be gauged according to what you are growing inside. Also, they are constantly feeding the plants CO2 and fertilizer is mixed in with the irrigation system. All greenhouse structures have a row of windows along its top that can be opened for ventilation. Depending on the plants, sometimes there are fans encouraging the air to move a certain way. All these details make for a happy, healthy, and more productive plant. In the end, he asked me if I liked tomatoes. I said yes, and he gave me two kinds, the plum (sweeter) and a larger one. It was so so nice of him and I can't wait to try these geothermally grown tomatoes. To top things off, he showed me the steam pipe by unleashing its fury. Holy cow!!! The pressure and heat coming out was incredibly intense!

After bidding farewell, I proceed to walk around the little city to document its spontaneous growth (as Dr. Gudni had put it- he also said this town should not exist because the location is a bit dangerous..) It is interesting to see how a city can just stop, and then you have landscape. I proceeded to the 'touristy' geothermal park that is only open to the public at certain hours. It encapsulates a demonstration of the source of geothermal- the hot springs. Here you have a display of an old well and a working one, as well as bubbling water-filled craters with a variety of colors surrounding its source. I think this is a result of the minerals that are embedded in the water and dye the bedrock. The steam is warm as it brushes by your face with a slight hint of sulfur. I wish I could capture this smell somehow. It has been the same smell I have experienced throughout my trip so far. What I detect in the water is the same, but much slighter. I don't think I can ever forget it.

Finally, I decided to do a little trek to the outskirts of town, up into the field of hot springs located nearby the Agricultural College. On my way, I went by the town's geothermally heated swimming pool- it was packed as expected. The water was as blue as can be and it was fairly big. Maybe olympic size? Maybe a bit smaller. It had a terraced hill on its west side which was quite lovely. Continuing up the hill, I passed the college to my right, and to my left there were 3 geothermal wells. Sverrir had mentioned these to me. On my way in, and back also, were these two birds conquering the grass that surrounded the wells. It seemed to be their favorite spot because they just did not move, even as I approached them. They just hopped away and started chirping to each other. I'm not sure of the species, but they were black with long, skinny orange beaks, producing a sound I had never heard before.

As I continued upwards I saw in its mighty glory some intense hot springs. They were huge and all interconnected. It made me realize that the very earth beneath me is doing the same...these magical instances are just exposing it. I continued down the path and I came across what I think to be my first real abandoned well. It seems like it had been rigged for local greenhouses, but I can't be sure. It stands there against the fissure-filled mountain range up on a hill top- proud and mighty in a way. There were concrete footprints, corroding pipes and towers, and on the opposite side, a white stain that flowed down the edge and into a fresh water source. I kept thinking A- that can't be good, and B- what the hell is it? It is definitely a condition caused by past human activities because of the machinery left behind. It was quite strange and eerie. I was alone in this vast landscape, face to face with what felt like a ghost.

It was a fascinating day. I finally was able to get close to and capture the source of geothermal energy, the hot springs that top out at over 100 degrees Celsius. It was amazing.

Tomorrow is another busy one, but I have a car for the day so I might be able to cover more ground. It is my last day in this region, so I have to make it count. I will begin with visiting the drilling rig at Hellisheidi. I will then proceed to Nesjavellir, the other geothermal plant nearby, and then hopefully on to Geysir- the place of the largest geysir in the world I believe- another instance of the geothermal phenomenon I am hoping to capture. And then onto Fludir to meet Hannibal, who is an expert in house heating and will also show me the massive greenhouse operations. I think it will be great to capture the two different scales: local/regional vs national.